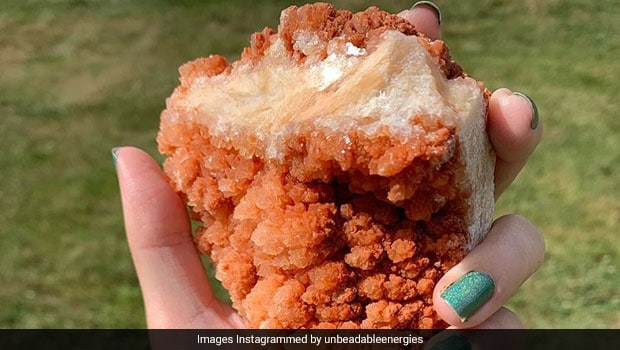 Netizens were divided over this illusory picture.

If there’s one thing that the lockdown has brought out in us, it is the urge to travel and eat restaurant-style food. Recently, a picture of a cheesecake had surfaced on the internet which seemed to some users like the rear end of a ship – thus revealing their innermost desire to go on a vacation. The internet often shares many such illusory pictures which as first glance seem like something else but in reality they are something different altogether. One such similar picture surfaced on Twitter with the picture of what seemed to be a piece of fried chicken, however, a closer examination revealed otherwise. Take a look:

The image was shared by ‘Garlic Powder’ on Twitter and credited to Amelia Rude, who has her own venture of bracelets on Instagram. It was actually a rare red calcite cluster which Amelia Rude encountered and the pictures of it broke the internet. She later posted on Instagram about the crystal and how it was intended as a joke, but really got viral quickly. Take a look at some more pictures of the crystal.

The image of the crystal got 280k likes and over 50k retweets on the micro-blogging platform. People poured in their comments reacting to the delicious-looking crystal, which they actually, believed was a fried chicken tender. Many users shared other hilarious pictures of similar crystals which closely resembled other food items. Take a look at the reactions:

That is a chicken tender that looks like a crystal.

Honestly thought you were trolling us. I had to take a second look

Here’s a Crystal that looks like raw meat (#Rhodochrosite) pic.twitter.com/3LNTcKXPHE

We hope to see many more of such internet ‘gems’ on Twitter soon!