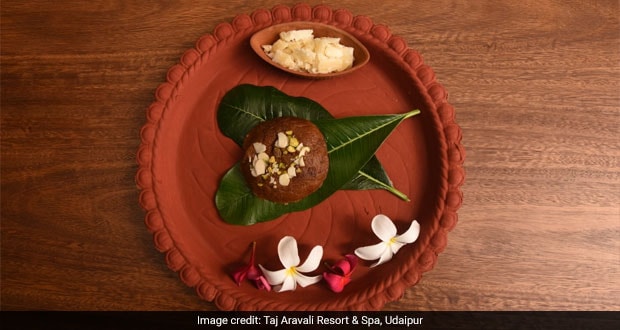 Makai Ki Galvani is a gluten-free dessert that one can make in just about 20 minutes.

There’s something comforting (read therapeutic) about Indian desserts that even the fanciest global sweet treats can’t match. Be it the scrumptious rasgullas or creamy deliciousness of kulfi falooda, desi desserts never fail to impress us. Isn’t soan papdi and kaju katli our most favourite secret indulgence during Diwali? And a heart-warming bowl of kheer is perhaps the quintessential part of a celebration. Yet, there are a plethora of sweet treats in Indian cuisine that haven’t got their share of limelight.

The regional cuisines of India boast of some of the most unique dishes yet aren’t known to many of us. Rajasthani cuisine, for instance, is a potpourri of distinct flavours and treats that scream indulgence and all things delicious. The subtle blend of royal tradition and culture with its cuisine is hard to miss. The locals in Rajasthan like their dishes spicy and robust, and desserts sinful! Rajasthani desserts are usually ghee-laden which lends that extra flavour. We have this super delicious hidden gem from the Aravali ghatis of Rajasthan- Makai Ki Galvani.

Rajasthani desserts are known to be ghee-laden.

A festive sweet treat from Ghoda Ghati and Haldi Ghati near Nathdwara in Rajsamand district of Rajasthan, Makai Ki Galvani is a gluten-free dessert that one can make in just about 20 minutes with only 4 ingredients. All you need is ghee and cornflour (Makai atta), cook it until well-roasted and golden, add jaggery dissolved water and cardamom to it. Makai ki galvani is very popular amongst the local communities of the region. Not only is it quick but also free of refined sugar. Many families even serve it as a Prasad in their traditions.

Due to the rich amount of maize and kernel, found in the Mewar region of Rajasthan, the use of cornflour is prevalent throughout. It is gluten-free and is versatile to use in countless desserts.

This quick and easy Rajasthani dessert recipe is perfect to satiate your sweet tooth in no time! Try it at home and share your experience with us in the comments section below.