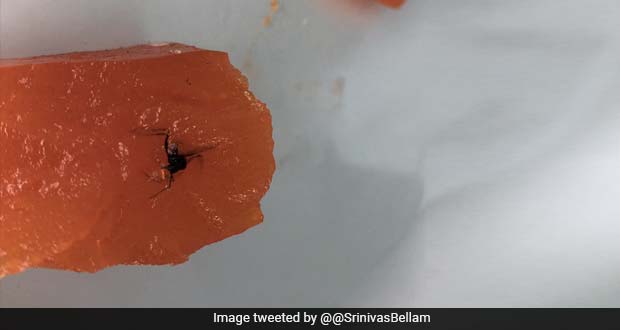 Halwa with insect was delivered in Hyderabad.

During this time of Coronavirus pandemic, we are overly cautious about cleanliness and hygiene, especially about the food that we are eating. A man’s worst fear came to true when he found an insect in his food. Hyderabad-based Srinivas Bellam ordered a dessert from a local eatery through food delivery giant Swiggy, and much to his horror, found a dead housefly inside it. Srinivas Bellam used Swiggy to order a combo pack of Butta Bhojanam from Subbayya Gari Hotel in Kondapur.

Srinivas Bellam took to Twitter to vent out his disgust and also shared pictures of the dessert (halwa) in which we can clearly see a housefly cooped up inside. He wrote – #HouseflyHalwa delivered by @swiggy_in from #Kondapur @subbayyahotel @SwiggyCares says best in class safety standards, this is what they are following.

The food delivery platform promptly replied to the post assuring proper probe in the matter. “Appreciate your patience. We’ve done a review & are lost in words for the encounter you’ve faced… We will be reaching out to you over a call & have this addressed accordingly.” “We totally understand & assure you we will have this investigated. Our team will be connecting with you shortly & have this cleared up.”

Appreciate your patience. We’ve done a review & are lost in words for the encounter you’ve faced… We will be reaching out to you over a call & have this addressed accordingly.

@p_ivaturi If you see the tweet I tagged both of them in the tweet I didn’t said it is swiggy’s responsibility I only copied what they certified on their app pic.twitter.com/ggKZzh5smg

Srinivas Bellam admitted in another tweet that he didn’t really hold Swiggy responsible as much as the restaurant that cooked the food. But, that wasn’t enough to convince other Twitter users who lashed out their anger for food hygiene measures not being followed.

One user commented “We need food inspection authorities to intervene for good of the people who are totally relying on these services and especially during Covid any such incidents should not be tolerated.”

Another user even shared his own experience by posting a picture of amber fruit with a mosquito inside that he apparently received in online food delivery.