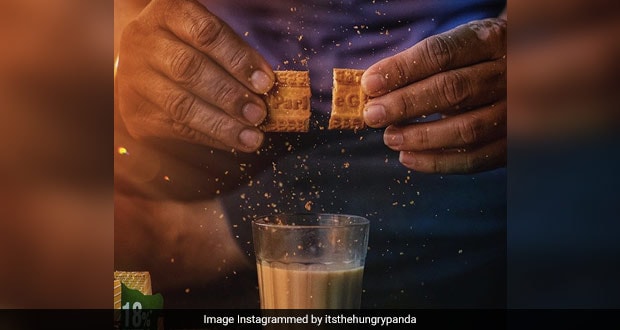 The countrywide lockdown, which was imposed to curb the spread of global epidemic Coronavirus, has given rise to several interesting food trends. The trends began with the aesthetically pleasing, delicious Dalgona coffee, which went viral across the globe. Then came other viral recipes like banana bread, which made the best of easily available ingredients at home. However, one recent food trend has taken us by surprise – that of the humble Indian glucose biscuit, Parle-G. The trend was first spotted on Twitter, as netizens reacted to the news that Parle-G has registered record high sales during lockdown.

Parle-G is a brand that has been around in India since 1938. Indians automatically associate the biscuit as being the perfect accompaniment to their cup of tea. During the lockdown days when we made do with the bare minimum essential supplies, it has proved to be at the top of our list. The 5-rupee packet of Parle-G is a satiating snack, a comfort food and also a versatile ingredient – all rolled into one. Indians’ love for the humble glucose biscuit has translated into a tremendous growth in sales for the company in the lockdown period, as per reports.

Although the exact quantity of Parle-G sold is unclear, yet the company claims that the three months of March, April and May have been by far the best for Parle Products in a whopping eight decades of the company’s existence. According to Mayank Shah, who is the category head at Parle Products, the company has registered a growth in overall market share by nearly 5%. This growth has largely been driven by the Parle-G brand, which is one of the lower value products sold by Parle. However, it is the cheap price and abundant availability that has garnered the sales volume for the company. Shah told Economic Times, “During the lockdown, Parle-G became the comfort food for many; and for several others it was the only food they had on them. This is a common man’s biscuit; people who cannot afford bread – buy Parle-G.”

The humongous sales numbers of Parle-G biscuits are significant for the company and for Indian businesses at large, which are struggling to rake in revenue in these testing times. We hope we are ‘vocal’ for more such ‘local’ products that are reminiscent of our childhood days.