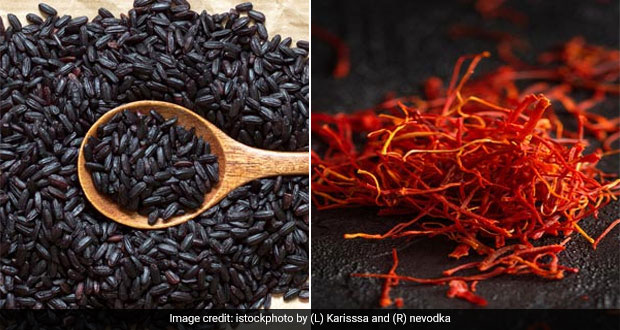 Manipuri Black rice and Kashmiri saffron have been rewarded the GI tag.

The year 2020 is seeing a growing trend of an inclination towards indigenous foods and locally grown produce. In keeping with this trend, two of our Indian states’ famous foods got their very own Geographical Indication (GI) tags. The tag is awarded to products which have a specific origin and are known to possess properties due to the place where they are originally grown. There are a number of foods across India which have been awarded the tag such as Darjeeling Tea, Bikaneri Bhujia, Karnataka’s Mysore Pak or even the famous Nagpur Orange.

The food that received the GI tag in recent times is the Manipuri Black rice, also known as Chak-hao. The news was recently shared on Twitter by the Ministry of Development of North Eastern Region. Take a look at the tweets:

The Geographical Indications Registry website confirmed the report of registering ‘Chakhao’ in the name of ‘Manipur black rice’ on their official website.@DrJitendraSingh@NBirenSinghpic.twitter.com/TbF0xPZBNr

Chak-hao, the black rice of Manipur has bagged the Geographical Indication (GI) tag. This scented glutinous rice is characterised by its special aroma and nutritional value.#chakhao#manipuricuisine#INDIGENOUS#blackricepic.twitter.com/waA5MFhYoj

The Chak-Hao is locally called as black rice, but the Manipuri people say that it is actually deep purple in colour. The Manipuri black rice has a lot of health benefits and is also completely gluten-free. There is also a special aroma that comes with consumption of the black rice. Apart from its high content of vitamins and minerals, the black rice is also rich in an antioxidant called Anthocyanin. It is also great for hair and skin, and is loaded with fibre and iron.

The second food item that has made it to the Geographical Indication (GI) list is the Kashmiri Saffron. The unique identity and excellent quality of the indigenously produced spice has given it this honour. Take a look at the tweets:

Kashmir saffron, which is a spice and health rejuvenator and the pride of Jammu and Kashmir, has been given geographical indication (GI) tag, protecting the uniqueness of the farm produce.

The health benefits of Kashmiri Saffron are manifold, from helping in the treatment of cold and fever to aiding the process of learning and memory retention. It is no surprise that the aromatic and flavourful spice is a must-have in the kitchen, especially when cooking biryani or being had with milk or yogurt.

The GI tag is the equivalent of a trademark, thus giving protection to local farmers and producers of the goods. We hope more such local foods get this honour and recognition across India!