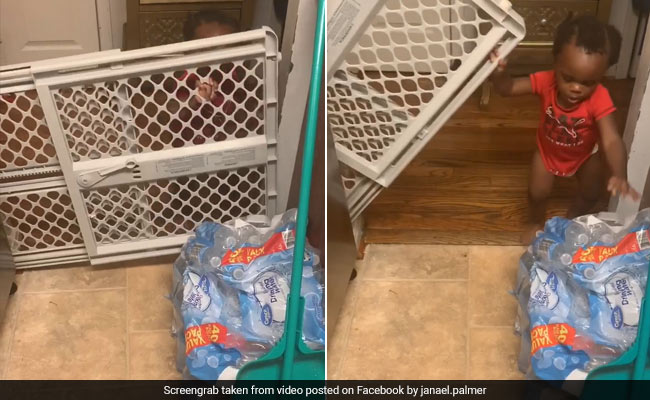 The video of a kid stealing snacks from her kitchen inspite of all odds has gone viral.

The internet is crazy about cute videos, whether they feature babies or pets. However, toddlers aren’t just about their adorable antics. Sometimes even these small babies show the prowess that adults are usually associated with. A one-year old baby recently took over the Internet with how skilfully she stole snacks from her kitchen, in spite of her mother installing a gate in a bid to prevent her from doing the same. Take a look at the video that was originally shared on Facebook:

The video was shared on Facebook by the baby’s mother, Janeal Palmer from Maryland in the USA. She firstly clarified that she did not make this video up, and it was perfectly natural for the baby to do what she did. “I cannot make this kind of things up, this is exactly the kind of laughs that my day consists of and I need the extra energy to keep up. Please excuse the the mess, but I had to share,” Palmer wrote in the caption.

She further explained how she purchased a gate to keep her baby away from the kitchen so that she wouldn’t take snacks and throw the veggies around the kitchen. The baby got the better of it as she lifted the gate over her head and came into the kitchen to take snacks. “Well guess what the joke was on me,” wrote Palmer.

(Also Read: Seagull Shoplifts Snacks From Supermarket And You Won’t Believe How Smoothly)

The hilarious video soon went viral and found its way to Twitter as well. It garnered over 4.4 million views on the website, along with 244k likes and 61k retweets. People were surprised about how smoothly and stealthily she took the snacks from the kitchen drawer, and left everything exactly as it was so that her mother would not suspect anything. Netizens reacted to the video, praising the bright kid for her intellect at such a young age. Take a look at the reactions:

This is a very bright child and he is also well mannered. I love how he made sure the drawer was all the way closed and the gate was let all the way down both times. Then he threw the apple sauce over the gate because holding it while lifting it would be too much work. ????

What really killed me about this video was how the drawer got closed, the gate got closed, the water bottles got put back into position….this baby could get a job with the CIA no questions asked

He even fixed the water bottles. Bright! He can have anything he wants in that kitchen he keeps acting like that lol

I know adults who wouldn’t be smart enough to throw the food over the gate to free up both hands.

Have you experienced such a funny incident with a toddler at home? Tell us in the comments below!