Pic Of Jupiter Goes Viral As Twitterati Feel It Resembles A Sizzling Dosa. Seen It Yet? 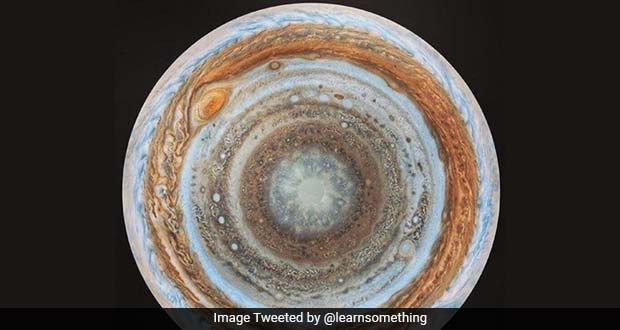 An image of planet Jupiter is going viral due to its resemblance with a dosa.

Social media is one place where foodies abound. There are tons of food photographs and videos to feast their eyes on. But foodies on Twitter took their obsession with food a notch higher when they spotted the popular South Indian dish Dosa in one of the most unlikely places – a picture of planet Jupiter. The image was taken in the year 2000 from the narrow-angle cameras aboard NASA’s Cassini spacecraft. It found its way to Twitter recently and garnered hilarious reactions from Indian foodies on Twitter. Take a look:

This is what Jupiter looks like from the bottom. pic.twitter.com/Dx9UoU7dmm

The image fooled most Indian users at first glance, who thought it looked exactly like a dosa. The tweet went viral on the micro-blogging website getting over 35k likes and many thousand comments from users. Some people questioned the image’s veracity, wondering how ‘top’ and ‘bottom’ could be distinguished from outer space. Other users rolled with mirth at how much the planet’s picture resembled a hot sizzling dosa, captured in the process of being roasted on the tawa. Here are some of the reactions:

Who else thinks it’s a sizzling Dosa about to be smeared with some butter and loaded with a chunk of bhaji stuffing before being turned over and served with hot Sambhar and coconut chutney. https://t.co/V4N5X2e2og

Officially establishing #dosa is out of this world? pic.twitter.com/YJLQ2LySlq

It is a dosa. Jupiter is fake news.

(Also Read: What Ingredient Can Make Anything Taste Better? Here’s What Twitterati Vote For)

Did you see a Dosa in the picture too? Tell us what you saw in the comments below!