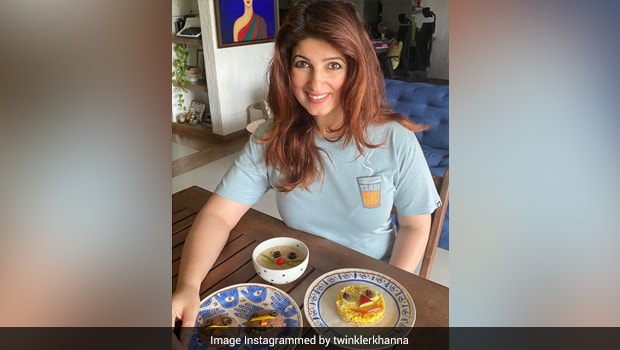 Interesting and unique dishes are found aplenty on social media, but these days the emphasis is on presentation. No matter what the preparation may be – it is important to click it in a way that looks appealing and delicious. This is specially true for recipes that are intended to be served to children. If the dish does not look good, they probably won’t eat it. Producer-author Twinkle Khanna, who is known for her wit and humour, took to Instagram to share an innovative dish that she had made for her children. Not only was it delicious and healthy, but the results of her food endeavour looked absolutely adorable too. Take a look:

“If my current state of mind had its own emoji – Here is my edible simulacrum of being bleakly optimistic #SundayStateOfMind,” wrote Twinkle Khanna in the caption. The dish that she had prepared apparently looked like a serving of scrambled eggs. She interestingly plated the preparation in a circular shape, and used fruits and vegetables to make it look like a face. Slices of cucumber and dried dates formed the eyes, a triangular piece of apple made up the nose and a sliver of red bell pepper was the smile.

Twinkle Khanna had earlier shared some similar preparations that she made for her children as part of the #WhatsInYourKidsDabba challenge ongoing on social media. The dish she shared was a Ragi Idli with a cute face drawn on top. Check it out:

(Also Read: Queen Of Wit Twinkle Khanna Had This To Say About The Breakfast She Made For Daughter)

This easy technique can definitely make even the most simple dishes look appealing for kids. What a unique way to feed even the most healthiest of dishes to your children! Do you have a similar hack that you use in your kitchen too? Tell us in the comments below!