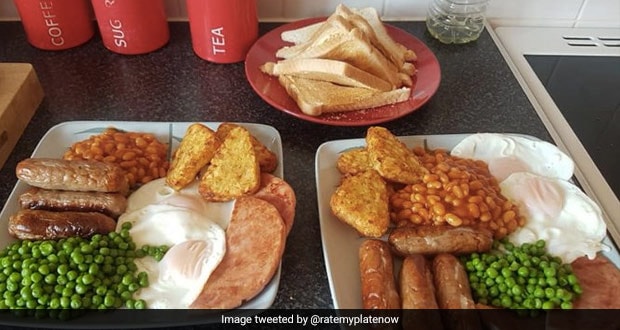 We all limit our breakfast to certain kinds of foods and stick to them pretty much throughout our life. That sense of familiarity in the morning is everything. So, when this home chef broke the rules and tinkered with the iconic English breakfast, many foodies did not take it so well. The ever-popular English breakfast – a medley of different foods – has stayed the same for years until Jessica M decided to experiment with it and added never-seen-before peas to the platter. And, this sparked a war-of-sorts on Twitter.

Home chef Jessica M made the classic English breakfast with sausages, bacon, hash browns, baked beans, fried eggs and bacon. This was perfect until she added peas to the plate and posted a picture of her unconventional meal on Twitter page ‘Rate My Plate’, where food enthusiasts share their culinary creations and seek reactions of other followers. Not surprisingly, the post led to a heated debate with many enraged users shooting it down outrightly, even calling it ‘sacrilege’ to the iconic British meal.

Many users brandished ‘peas for breakfast’ as a total crime with comments like “Crime against breakfast”, “It’s a criminal offence to consume peas before noon”, “Peas on a breakfast commands a 10 year sentence in a hard labour camp and a further two years for aggravating my OCD.”

Again with the peas. This is not helping my mental health.

Peas for breakfast is a bigger crime than driving to Durham….

However, there was another camp favouring the bold step. One user wrote – “Give peas a chance” and another Twitter post said, “We admit that peas in an English breakfast is a bit rogue, but we also admire the attempt at making it healthy.”

We admit that peas in an English breakfast is a bit rogue, but we also admire the attempt at making it healthy. Thoughts? #PEAShttps://t.co/esVcgiWu8R