Varun Dhawan’s delicious Sunday spread was sent over by his co-star actor.

Sundays are meant for spending quality time with family, friends and loved ones. The day becomes even better when we get to indulge in some good food accompanied with great conversations. Varun Dhawan’s recent Instagram story showed us a glimpse of his foodie and fun-filled Sunday. The actor devoured a delicious-looking spread and the fun part was that it was actually courtesy one of his closest actor friends from the industry. Can you guess who it was? Take a look at his story below! 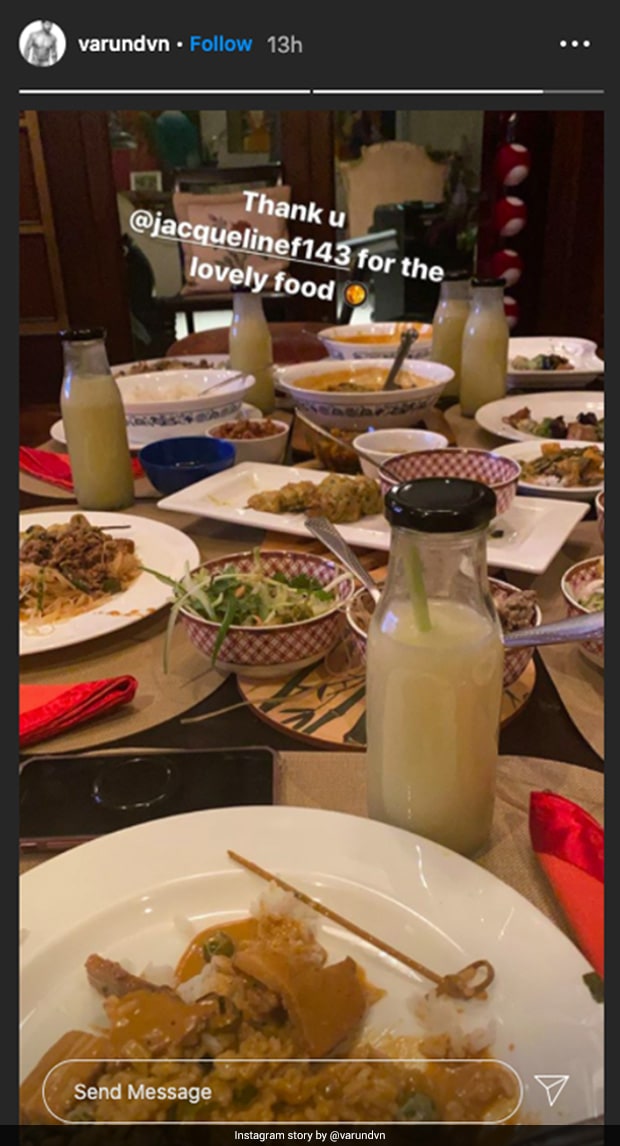 (Also Read: Varun Dhawan’s Sunday Cheat Meal Was Made By His Body Guard!)

Yes, you guessed it right! Varun Dhawan’s delicious Sunday spread was sent over by none other than his ‘Dishoom’ co-star Jacqueline Fernandez. “Thank you @jacqueline143 for the lovely food,” the actor wrote in his Instagram story. The picture of the food that he shared on his stories was a full meal comprising a number of interesting and unique dishes. Varun Dhawan and his family seemed to be eating a delicious rice preparation paired with a Thai-style vegetable curry. Kebabs and salad could also be seen in the picture on Instagram. There was also some kind of juice or drink to accompany the meal. Kudos to Jacqueline Fernandez for sending over such an amazing feast for Varun Dhawan!

‘Dishoom’ recently completed four years since its release. The film had Varun Dhawan, John Abraham and Jacqueline Fernandez as its leading cast. Varun Dhawan recently shared a picture from the shoot as well as a fun foodie trivia about his co-star John Abraham. Take a look:

Varun Dhawan wrote in the caption how John Abraham actually ate a whopping 21 water melons during a single day of the film’s shoot. “This was one of the best teams I worked with . 2 of my elder brothers always had my back. Maybe its time to get the band back together. Also John ate 21 water melons in one day while filming in the dessert,” wrote Varun Dhawan in the post. The fun trivia was a hit with fans and followers of the actor, and many people could relate since desert shoots go hand-in-hand with scorching heat and soaring temperatures. Watermelon is one fruit which is recommended for these temperatures since it can restore the body’s hydration levels, and is light to digest too. “Omg! 21 watermelons,” reacted actor Shilpa Shetty in the comments.

On the work front, Varun Dhawan is reportedly signing a film alongside actor Kiara Advani. His film with Sara Ali Khan, ‘Coolie No.1’ will also be seen in theatres once the Covid-situation improves.