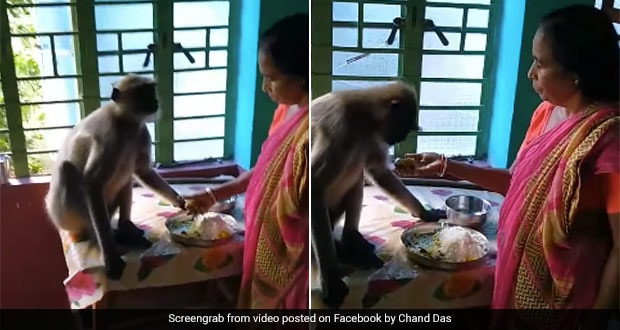 The video of a Bengali woman feeding a langur has gone viral.

The global lockdown imposed in the wake of the Coronavirus epidemic has been harsh on not just humans, but animals too. There have been numerous videos surfacing online with monkeys and other animals scrounging for food remains, even resorting to drastic measures. Animals who are dependent on tourists to feed them have been seen fighting just to gain that one last morsel. However, a recent video that surfaced on social media shows a Bengali woman feeding a langur inside her home. Take a look:

The video was uploaded by a Facebook user, Chand Das, who said in the caption that the lady feeding the langur was his mother. It was shared over 28k times and received over 14k likes on Facebook. The langur was inside the home of the Bengali family, and seemed quite at ease with the people who were sitting quite close to him. The lady made tiny bite-sized portions of the simple meal of dal and rice, and held it up close to the animal’s mouth in order for him to eat it.

The viral video received over 2,000 delighted comments from netizens, who poured in their reactions. Almost all users expressed their thankfulness and gratitude to the lady for doing this noble act. The lady’s kind-hearted gesture towards the hungry animal was appreciated all over, and we hope to see more such acts of humanity in the near future.