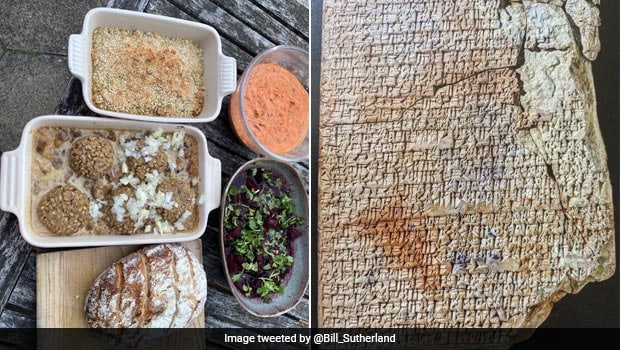 Twitter user dug up some of the world’s oldest recipes and tried making them at home.

If there’s one thing that the lockdown has provided us, it has to be the time and freedom of experimentation in the kitchen. Be it Dalgona coffee or Banana bread – we have seen a number of innovative and exciting recipes go viral in this period. We also heard the news of various ingredients and foods being retrieved from the bottom of the freezer to finally be put into use. One such Twitter user actually went and retrieved a 4,000-year-old recipe and tried making it at home during lockdown. Take a look at his viral tweet:

I blame lockdown but for some reason decided to cook Babylonian meal from the recipe tablet on the right; at 1750 BCE are the oldest recipes existing. Seemed to go down OK “Best Mesopotamian meal I have eaten”.
A thread 1/6 pic.twitter.com/gqYMJopbxM

(Also Read: Twitter Thread With Rihanna As Indian Food Has Struck Gold On The Internet)

The user, @Bill_Sutherland, recreated some of the world’s oldest recipes from 1730 BC. These are recipes by the Babylonians and Assyrians in Mesopotamia, which is present-day Iraq and also includes parts of Syria and Turkey. The world’s oldest known recipes have been written on stone tablets, and then translated by experts in the field. However, these recipes are unlike anything you would have ever read. These are simple instructions condensed into just four lines, without any mention of quantities of ingredients to be used or the specific methods. Thus, a lot is left to the cook’s imagination in these intriguing old recipes.

The dishes that Sutherland chose to make in his six-tweet long Twitter thread ranged from a lamb stew to an ancient broth called Tuh’u. He shared the pictures of the dishes that he prepared along with the ancient recipes from Mesopotamia. Take a look:

Stew of lamb. This was simple and delicious. Crumbled in a couple of barley cakes (made by daughter Tessa), which made a rich unctuous sauce. Crushed leek and garlic topping gave it an sharp edge 2/6 pic.twitter.com/5UlPUc2plF

Tuh’u. Thought this looked stunning and full of flavour. Think I should have cooked a bit longer to disintegrate more 3/6 pic.twitter.com/ZTJiQE1XWl

The Twitter thread soon went viral on the micro-blogging website, garnering over 51k likes and counting. People poured in their reactions to the old recipes as well as their recreations. Take a look at some of the comments to the thread:

Damn you gotta read that whole tablet just to get to the recipe at the bottom, I hate that.

Excellent work- wish they had restaurants were they served ancient food like this.

I wish all recipes cookbooks used that syntax — “you do this, you do that.” Then when you screw it up later there’s no question it’s totally on you.

Would you try these age-old recipes at home? Tell us in the comments below!