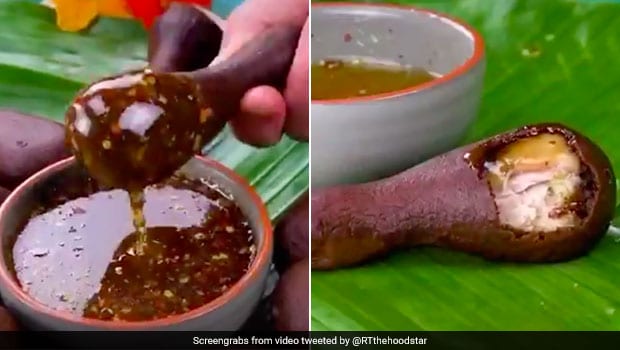 Twitter had a hard time digesting chicken fried with chocolate.

Think of chicken and the very first dish that pops to mind is fried chicken. Countless people across the globe just can’t seem to resist this zesty preparation which is an absolute no-fuss recipe. Succulent and delicious chicken pieces are coated with breadcrumbs and deep fried till crispy and and golden brown. Fried chicken is a dish you just can’t go wrong with – it yields delicious results every single time. But a recent video that surfaced on the internet proves otherwise. A Twitter video that shows chicken being dipped in chocolate before being fried has appalled netizens. Take a look:

White ppl come outside right now we need to throw hands for this. pic.twitter.com/NMOmGTyqH0

The video was originally shared by users @unadelicia and it soon found its way onto Twitter. It received 1.3 million views and counting, as well as nearly 50k likes and 16.3k comments. The viral video featured chicken drumsticks, which were first roasted in the oven and then dipped in molten chocolate. Then, the chicken was deep-fried after which the chocolate coating hardened, and subsequently shown being served with sweet chilli sauce.

Netizens were aghast at the bizarre combination of fried chicken and chocolate. Many reacted to the video saying that they had ‘seen it all’ and wanted a stringent punishment for the inventor of the weird dish. Other users pointed out that the chocolate does not harden on frying, and this was a special kind of dip. Take a look at the reactions:

HOW?, A. that cant work the Chocolate would stay on as you deep fry did they really use CLAY? B. WHY WOULD YOU WANT THAT.

When we asked yall to season your chicken, this wasn’t what we meant..???? pic.twitter.com/evFuGUXw35

Ewww. Ewww ..and ewww chocolate does not belong on chicken under mo circumstances.

Even , if that was the last two items in the fridge on a Saturday night

See, this is the problem being a chef. you think you made something new but really, it’s just a mess

It’s not chocolate, it’s mole. An indigenous Nahuatl sauce. You can’t deep fry chocolate and expect it to become a solid.

What do you think of the fried chicken combination? Tell us in the comments below!