Indian Cooking Tips: How To Make Recheado, The Fiery Goan Masala (Recipe Inside)

Goa is popular for the extensive use of local spices in its cuisine.

If you aren’t the unfortunate one whose Goa plan got cancelled again, you would know that the place has got everything a perfect holiday would need — sun, sand, beaches and an endless variety of delicious food! Authentic Goan cuisine is something that attracts many of the tourists from across the world, flocking to this western coastal state of India. Goan food can be easily said to be a potpourri of flavours, all thanks to the locally procured ingredients such as coconut, jaggery, nuts and a variety of seafood.

Largely influenced by the Portuguese, who lived in Goa for almost 450 years, one can find many similarities between the Goan cuisine and the Portuguese-style of cooking. The extensive use of vinegar and spices is one of them. If you love your dish as spicy as it can get, Goan spices are exactly what you need. And one such fiery spice is the Recheado or the Goan red masala. As the name suggests, Recheado in Portuguese means ‘stuffing’, and the masala is mostly used as a stuffing in mackerels and other seafood; however, it is a versatile masala paste that can also be used in marinating chicken, prawns or even in vegetarian dishes. 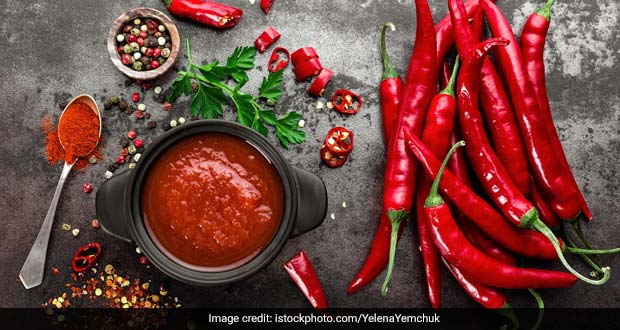 We’ve got a quick recipe for the famous Recheado masala here. In this recipe, onion, garlic, cloves, red pepper, vinegar, peppercorn, tamarind and sugar are grounded to a thick paste. The paste is then added to a pan of sautéed onion and tomatoes to cook until fat separates. The fiery masala is ready to be used! You can also add cardamom and cinnamon too for added flavour.

Try it at home and let us know your experience in the comments section below.