Viral Video Of 2-Year-Old Boy Baking With Grandma Is Too Cute To Miss! 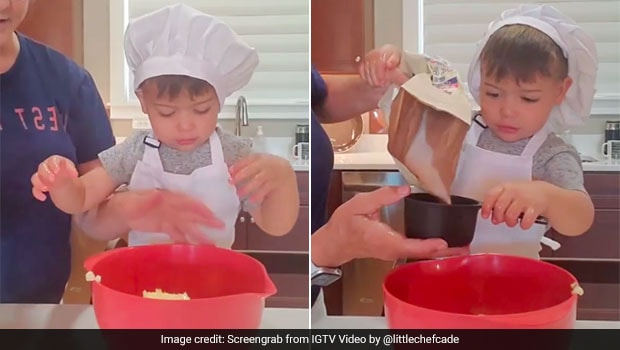 This adorable baby and his antics have won over the internet.

Baking has undoubtedly become one of the favourite pastimes in lockdown. There’s something so calming about the entire process, right from measuring ingredients to mixing everything together to finally savouring the decadent results. Baking is also quite simple – all you have to do is combine the ingredients in the right proportion and half the process is sorted. A hilarious video of a toddler baking with his grandmother has gone viral on the internet, and trust us, it’s just too adorable to ignore. Take a look:

(Also Read: One-Year-Old Chef Is Taking Over Instagram With His Cuteness And Cooking Skills!)

The video was shared on Twitter by the handle @thesadd3stngel, and it was originally sourced from the Instagram handle @littlechefcade. It went viral on both social media platforms, amassing over 10 million views and counting. The video received nearly 380 likes and 180k retweets and quote tweets. Users adored the cute grandma-grandson duo and their antics.

In the video, the grandmother was teaching her 2-year-old grandson, Cade, how to bake cookies. She explained to him how to add flour, sugar and butter to a bowl and mix it well. He was understanding and cooperative to what his grandmother was trying to explain, but he couldn’t keep his hands off from eating what was in the bowl. His hilarious reactions and how he tried to eat the ingredients was very relatable for netizens to watch.

The cute video received a number of reactions from netizens. People thronged the comments section, saying they couldn’t stop smiling and they wanted to see more! Take a look at the reactions:

She clearly didn’t give him a snack prior to doing this. He was beyond hungry and not waiting for none of that to get cooked ????????

The day you add a little chilli to the mix, he will behave himself from hence forth.

What did you think of the cute video? Tell us in the comments below!