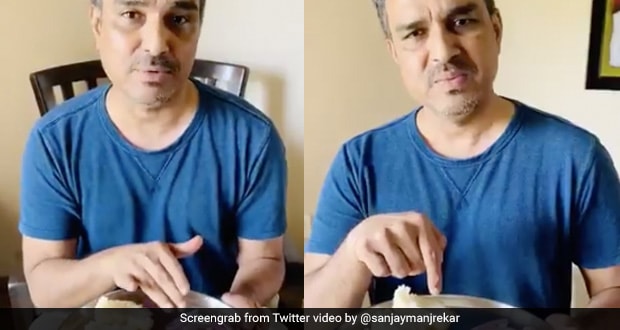 Believe it or not – food is said to be an integral part of our memories. There are some foods that take you right back to the realms of childhood. With the smell, sight, taste or even mere mention of our favourite foods – cherished anecdotes and nostalgic thoughts flood upon us. Cricket commentator and ex-cricketer, Sanjay Manjrekar traversed down memory lane with a recent lunch that his wife cooked up at home. He shared a video of the delicious Keema Cutlet she had made, and how it reminded him of his erstwhile cricketing days. Take a look at the video:

“When I used to land up at the Islam Gymkhana, before looking at the pitch, I would enter the kitchen and ask Kader Bhai, ‘Aaj kya hai?’ And if he would say Keema Cutlet is there for lunch, I would invariably look forward to lunch break,” said Sanjay Manjrekar in the Twitter video. The number of cutlets each person could take would be restricted to two, as Sanjay Manjrekar said, and this rule would not be relaxed for anyone. The Keema Cutlet was so iconic, that it was said that even if the Cricketing pitch at the Islam Gymkhana wasn’t ready – the cutlet would always be ready!

Everyone knows Sanjay Manjrekar’s love for food, and we can also see the same from his other Twitter posts. He shared his happiness on having to taste some Cinnamon rolls and Pizza made by his daughter, while in another video he was seen teaching how to chop beans. Take a look at the posts:

@devikambing using this lockdown period to finalise the menu at ‘her soon to open’ cafe. Which means I have to taste these dishes. Life is tough. ????#Lockdown#CinnamonBuns#HappyEasterpic.twitter.com/1DNss8XL1p

It’s really about the technique, you know. #Quarantinepic.twitter.com/zzpe13iSxv

(Also Read: Virat Kohli: All About His Diet And Fitness)

We hope to see more such food anecdotes and legends of famous dishes from the Cricketing stalwart!