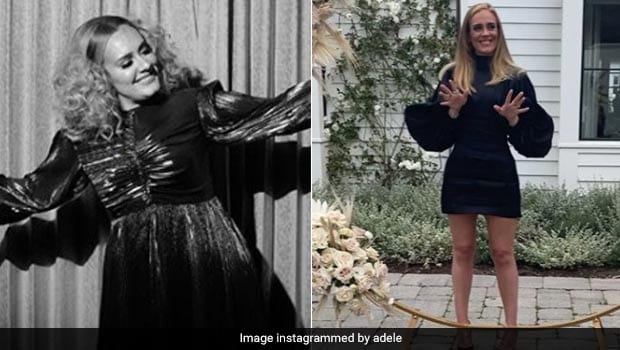 The British singer’s prowess as a singer, songwriter and entertainer has been recognised time and again, thrilling audiences and critics alike. Adele has won 15 Grammy awards, as well as 22 billboard Music awards. Some of her best and most popular tracks include ‘Someone Like You’, ‘Rolling In The Deep’ and ‘Set Fire To The Rain’. These three tracks were among the top 10 of the Billboard top 100 – a record-breaking achievement for a solo female artist. Adele celebrated her 32nd birthday on 5th May, 2020 and she shared a picture of herself on her Instagram profile to thank everyone for their wishes. She donned a black dress and appeared to have lost a lot of weight. Take a look at her post:

“Thank you for the birthday love. I hope you’re all staying safe and sane during this crazy time. I’d like to thank all of our first responders and essential workers who are keeping us safe while risking their lives! You are truly our angels 2020 okay bye thanks x,” read Adele’s caption on the post. Her significant weight loss was reconfirmed when another picture of her was shared by her friend Lauren in her Instagram stories. Take a look:

According to reports, the British singer has lost almost 50 pounds or 20 kgs over the course of a year. Adele’s incredible weight loss is something that is being attributed to the Sirtfood diet – a diet she has been rumouredly associated with since the year 2016 as per New York Post. Aidan Goggins, author of The Sirtfood Diet, tells Sun Online that the singer has “publicly shunned conventional dieting and extreme exercise in the past”, instead losing weight by eating “favourite, everyday, accessible foods”.

Adele reportedly took up pilates as well at the recommendation of her friend, but her instructor Camila Goodis had revealed that she wasn’t a fan of the exercise regime. “I don’t believe she liked exercise much but she has changed her lifestyle and I believe that 90 per cent was dieting,” said Goodis to Sun Online.

So what is the Sirtfood diet that Adele is supposedly following?

According to the diet, there are certain kinds of ‘Sirtfoods’ which activate proteins in the body called ‘Sirtuins’. These are very specific proteins in the body which help regulate stress levels, inflammation, as well as the ageing process. They also give a boost to metabolism processes. Some foods which are included in the diet include green tea, apples, parsley, turmeric, red wine, blueberries, dark chocolates, citrus fruits, soy, olive oil, kale and coffee.

Herbs and leafy greens are recommended in the Sirtfood diet.

If this is the diet that Adele is following, there is no denying the fact that the plant-based diet has worked wonders for Adele’s weight loss. She has come out shedding kilos and surprising everyone with her remarkable progress. However, Nutritionist and Macrobiotic Health Coach Shilpa Arora warns against practicing the trending diet and following such celebrity fads blindly.

“Trending diets or diets commitments that celebrities follow become extremely famous, however, this is a dangerous trend especially for our younger generations. There is no scientific or researched evidence of such trending diets. Just because something is popular and is trending on social media does not make it authentic,” says Shilpa Arora. She further says that in India, in the summers, we need at least 80% of water-based food which comes from eating seasonal fruits and vegetables such as watermelon, muskmelon and bottle gourd or gheeya. “Indian veggies like cucumbers etc are 90% water. Why is this available around us is because this is what our bodies need. Globalisation with sensiblity and logic applied has to be the future if we wish to achieve healthy bodies and a sharp mind,” concludes Arora.

So, before taking up a diet just because a celebrity is practicing it is not a viable idea sometimes. It is always best to take recommendations from a certified dietician before deciding on a diet plan. Adele’s diet plan may have worked wonders for her, but it is not necessary that it would do the same for us too. Everyone’s bodies are made differently and their needs and demands must be catered to, individually. We can, however, be inspired by Adele’s weight loss journey and how she determinedly followed the path to her healthier self. On the work front, Adele is going to be releasing her fourth album by September 2020. We wish her all the very best for her future endeavours, and we hope she keeps inspiring us with her music journey!