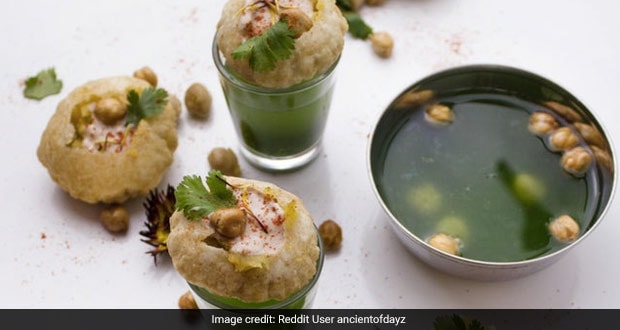 Pani Puri: An American chef put his own spin on the humble recipe.

To say that Pani Puri is a much-loved dish would be an understatement. The humble snack enjoys a fan following like no other dish. Whether you call it Puchka or Golgappa – the sheer number of people who love this dish surpasses most other street food items. While Pani Puri is adulated across India, when it comes to making it at home, most people falter. The tantalising preparation actually requires a meticulous eye for detailing as well as lots of hard work. An American chef made his own version of Pani Puri and shared the delicious picture on Reddit much to the delight of Indian users on the platform. Take a look:

I’m the westerner who did the Thali. Here is my version of Panipuri with roasted & puffed chana. from r/india

“I’m the westerner who did the Thali. Here is my version of Pani Puri with roasted & puffed chana,” the user theancientofdayz wrote sharing the picture on Reddit. The picture featured five puris that were filled with curd, roasted chana, spices and coriander leaves. There was also a helping of authentic Pani to go with them, which was plated in small glasses. Chef also placed some edible flowers as part of the preparation which gave it a beautiful look.

Reddit users could not get over how delicious the Pani Puri looked. “That’s a fancy presentation, we are used to eating “thela wala” panipuri,” wrote one user in the comments section. Another one commented, “Awesome work with the Indian food. Must try pav bhaji next!” Some pointed out how the Pani Puri preparation does not usually have both Pani and curd in it; however, the chef wrote back saying that the combination was delicious.

What do you think of the Chef’s rendition of Pani Puri? Tell us in the comments below!