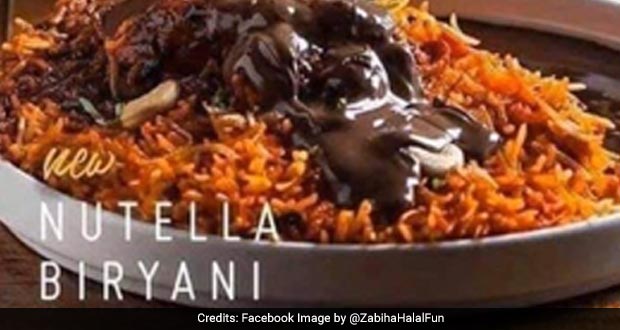 A Facebook page came up with the invention of pairing chocolate spread with biryani.

There are good food combinations which are interestingly made with a fusion of two foods you couldn’t have imagined. And then there are pairings of food items which make us wonder why they were invented in the first place. A Facebook post by a page has paired the much-loved chocolate hazelnut spread with the staple rice dish – Biryani, and the results weren’t to the liking of many netizens on the social media platform. Take a look at the picture:

“How excited are you for the new #NutellaBiryani?,” read the caption of the picture posted by @ZabihaHalalFun aka Muslim Memes on Facebook. The bizarre picture showed a luscious flavourful biryani in an orange-yellowish hue with chocolate spread drizzled poured on top. Both the things may be loved in equal measure, but only as individual dishes. Clearly, this absurd combination did not go down well with netizens who lashed out at the page for creating an ‘abomination’.

The post went viral on Facebook, garnering over 3.5k shares and 1.5k comments. Reactions to the post were mostly angry or appalled, with users commenting things like, “Stay right there! Imma call the damn cops!” One user compared this combination to the other topping on pizza which is hated by a lot of people, saying, “This is as sinful as putting pineapples on pizza.” Another user reacted by commenting with a picture of Elaichi or Cardamom, saying, “Wait until these guys kick in.”

Would you try the combination of chocolate spread with biryani? Tell us in the comments below!