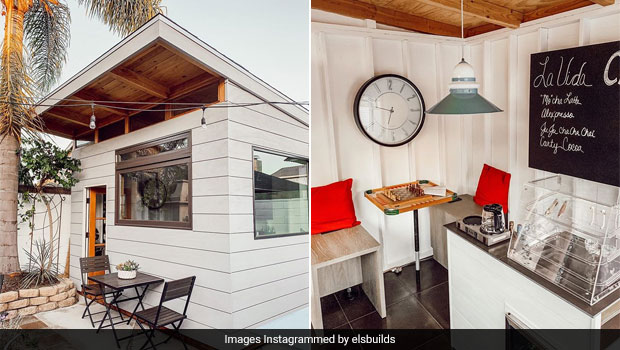 Ed has taken the lockdown time to build his own backyard cafe.

The period of lockdown has been experienced differently by different people. While some people felt lazy and lethargic, others have used this time to their productive best. One such father from Orange County, California, has achieved an unimaginable feat – he built his own coffee shop in his backyard. The man, identified as Ed, is a builder by profession and he used his time off from his job to get his hands dirty and create something new! The results were delightful for everyone to see –

Did my dad really build a coffee shop in the backyard by himself within 3 months? Absolutely. pic.twitter.com/QywbkN7y0K

The tweet of the pictures was shared by Julianna Astrid, who is Ed’s daughter. Her tweet went viral and garnered over 300k likes and 37k retweets. The cafe looked exactly like any other cafe that you would go to for a hot cup of coffee and your favourite snack. It was named ‘La Vida!’ Cafe by the father-daughter duo. According to the tweet and pictures, the entire cafe was built by scratch in just three months flat!

There is also an Instagram handle as well as a YouTube channel which the construction wizards have now started. Ed wrote on his Instagram, “This is the new coffee shop that I built in my backyard after fuelling my love for coffee into a cosy spot I can relax in, in the comfort of my own home. The structure took a little over 3 months but I will continue to add my personal touches on the inside as time goes by.” Reactions poured into the beautiful cafe and people couldn’t stop thronging the comments section showering their praises on the innovative cafe.

I don’t even drink coffee but this is nice!!

(Also Read: Pic Of Jupiter Goes Viral As Twitterati Feel It Resembles A Sizzling Dosa. Seen It Yet?)

Although many people dream of owning their own restaurant or cafe, this father-daughter duo actually put their plan into execution. What did you think of this brilliant idea? Tell us in the comments below!