Of all regions in India, India’s North-East cuisine has probably been the least hyped.

If you’re one of those who believe that Indian cuisine (especially how it’s represented abroad) is more than just Butter Chicken and ‘naan bread’, you’re part of a growing tribe. No, there’s nothing offensive about a Butter Chicken that hits the spot, I’ve found it comforting on many occasions too. It’s just that there are a whole lot of dishes from across regions in India that still haven’t got their due, their spot in the spotlight. I believe that’s set to change this decade. I am convinced that India’s very own regional and hyper local cuisines will be the new superstars as Chefs across India start looking inward for the new exotic. It’s why I was delighted after my first meal at the Grand Market Pavilion at ITC’s newest luxury hotel – Royal Bengal in Kolkata.

Buffet restaurants at large hotels can sometimes be soulless. Grand Market Pavilion is an exception. This busy dining space seeks inspiration from the Hogg Market (or New Market), Kolkata’s iconic commercial hub that dates back to 1874. This was once the treasury of produce for the entire country. With seating for 200, this is a large, almost intimidating restaurant. And the buffet stations – seven in total, are the restaurant equivalent of a maze. But this a maze you would enjoy getting lost in. And just like in my case, I hope you end up at the restaurant’s dedicated North-East section that is truly its highlight. 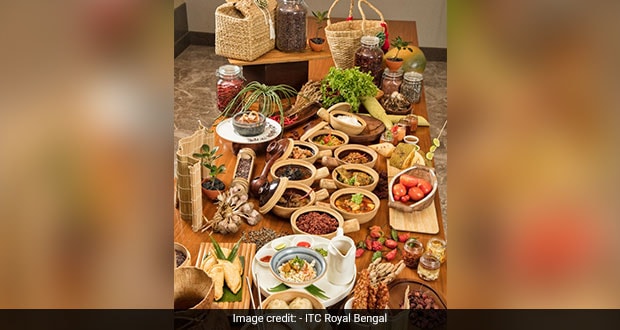 Of all regions in India, India’s North-East cuisine has probably been the least hyped, especially in a luxury context. There are quite a few cult dining spaces in many Indian metros, this is probably the first time a premier hotel chain has focused on the region’s diverse culinary traditions beyond a 10-day food promotion. With over 300 ethnic communities, tribes and sub-tribes and fiery chillies that power Naga cuisine to the Buddhist and Nepalese influenced fare in Sikkim, each state in India’s North-East offers an eclectic dining experience.

ITC Royal Bengal in Kolkata with easier access to local produce from the North-East, is probably better positioned than hotels in other cities to do justice. That was the first thought on my mind as I savoured the flavourful Sikkimese Kauri – a hearty broth with multiple condiments and handmade seashells tossed in to it. I’d also recommend checking out the Shyaphalay (see recipe below), pot stickers with Tibetan origins with minced country chicken folded into a crispy shell that is spiked with the fiery Raja Mircha chutney.

(Also Read: 5 Amazing Cafes To Try When You Visit The North-East Of India) 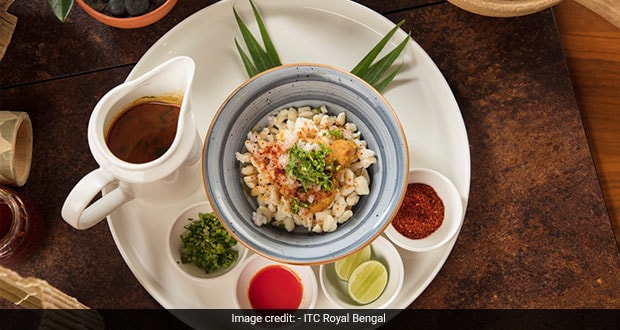 Simplicity is one of the hallmarks of many of these recipes. The Maroi Nakupi Ga Khajing Kanghou – stir-fried Manipuri prawns, depend almost entirely on just one ingredient – chives, for flavours. A welcome relief from Indian restaurant food where ingredients drown (or sink) in a sea of masala. It’s the same with Mylliem Pepper Chicken from Meghalaya that is contrasted by a delicate roasted onion gravy.

Banana flower is an integral element of Bengali cuisine; many of the vegetarian options on the daily buffet selection feature dishes with banana flowers. My favourite dish at the restaurant is probably the Awoshi Ngo Atsu – Naga-style Black Sesame Pork 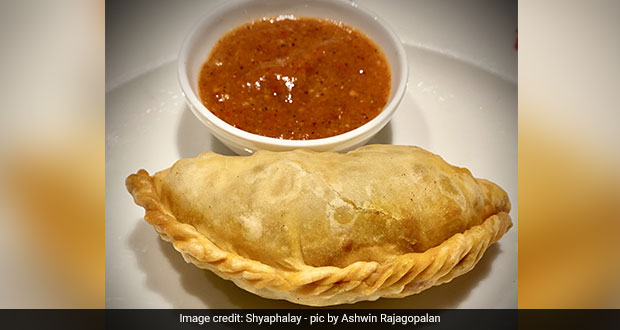 Method to make the stuffing:

1. Combine all the ingredients of the filling and keep aside.

2. Heat the oil in the wok & sauté the mixture to make the filling.

3. Set aside till the mixture is cool.

4. Cut the dough & evenly spread out.

5. Stuff with the filling & fold into half-moon shape.

7. Serve this with a simple roasted tomato dip:

Method: Put all the ingredients in the mixer grinder and blend to form a dip.