If you follow Mira Kapoor on Instagram, it would not be hard for you to deduce that Ms. Kapoor is a hard-core foodie. The fact that she can cook up a storm herself, makes her all the more appealing. A few weeks ago, she put together a wonderful Italian fare for her family in Delhi, and prepared everything from caprese salad, spaghetti to penne arrabiata. She also  gives out a few of her own recipes on her Instagram stories if she tries anything cool. In a recent Instagram AMA session with fans she dished out some of her foodie secrets you may not have known. For instance, did you know, like most of us, Mira is also a big fan of chef Gary Mehigan, chef Matt and chef George Calombaris of Masterchef Australia fame?

She said her favourite hobby was indeed cooking, and her favourite cusine is Thai, “Thai food all day everydat”, she wrote in her Instagram story. Her favourite Gujarati food is Undhiyo, and that she had Uttapam for breakfast earlier this morning.

In a reply to one of the fan questions, she listed out her most favourite Indian foods. “Dal Makhani,Paneer Makhani, Baigan Bharta,Soya Chaap, Gheeya/Tori in Any Form, My mom’s Kashiphal,Mom’s paratha, Gujarati Kadhi,Appam and stew, Spicy Rasam, poha. My FIL’s orange paneer.. Anything really..I live to eat”, she wrote. Mira is vegetarian just like her husband and actor Shahid Kapoor.

When asked about desserts, she gave a shoutout to marble cake from @bakedlovebyvatsala, chocolate cake from @malabindra, Truffle cake from @bigchillindia, rasgullas from Gopala (a popular Delhi Sweet meat shop) and barfi from Hoshiarpur, Punjab.
She also revealed her sheer love for Delhi’s momos, and the fact that she liked it better than Delhi’s Gol Gappa, especially the ones sold at Prince Pan, GK. 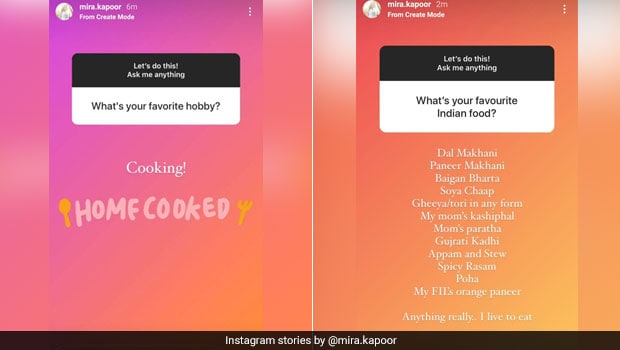 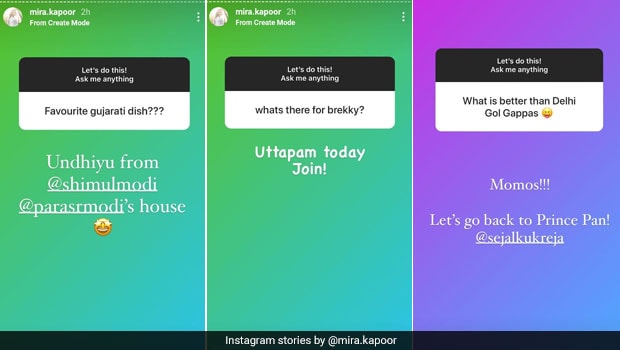 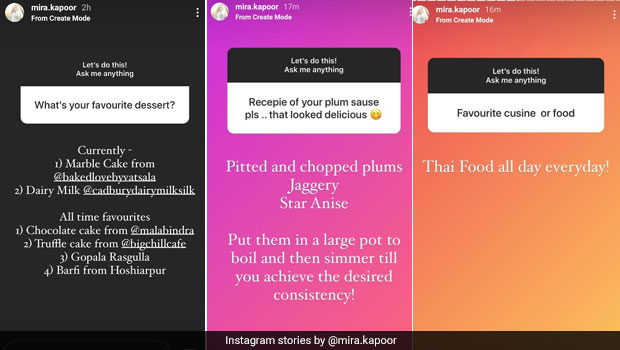