Indian Cooking Tips: How To Cook Paneer Tikka In A Microwave In Less Than 30 Minutes

Paneer tikka has a burst of flavours that can tantalise your taste buds.

Paneer is a hot favourite across vegetarian Indian households. It works like magic on multiple occasions across a variety of dishes. Be it the rich Indian gravies such as kadhai paneer and shahi paneer or the scrumptious appetisers such as tandoori paneer tikka or paneer pakodas, the humble cottage cheese is loved in all its forms. Not just that, paneer is also known for its health benefits. It is one of the best vegetarian sources of protein.

Paneer snacks are a rage across India, especially north India. Paneer tikkas and chilli paneer seem to rule restaurant menus and dinner parties at home, but one paneer dish that steals the show everywhere has to be the tantalising paneer tikka. A much-loved appetiser among all age groups, paneer tikka has marinated paneer cubes, skewered and grilled on a tandoor to give a range of flavours that are mouth-watering to say the least. And while we love to gorge on them at parties or restaurants, the thought of making them at home can make us hesitant. 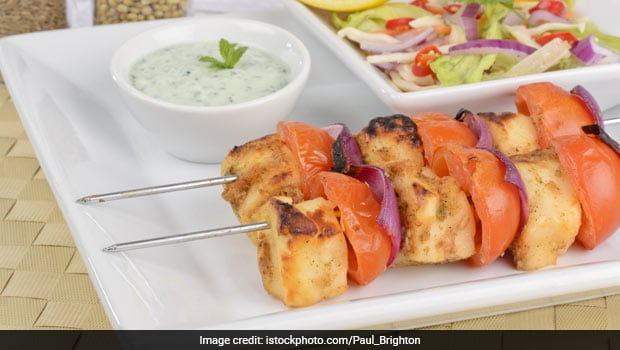 How To Cook Paneer Tikka In A Microwave:

The fact that they are usually cooked in a tandoor can be the biggest struggle since we might not have a tandoor at home. But did you know you could make the same juicy, succulent paneer tikka in a microwave too? Here is a stellar paneer tikka recipe that you can try at home and cook within 10 minutes!

All you need to do is marinate the cottage cheese cubes in a pool of spices and yogurt for about 20 minutes and then arrange it on a microwave-friendly plate, brush with some oil and let it cook for about 8 minutes in the microwave, turning over in between. You’ll have the classic paneer tikka with mouth-watering flavours of ginger-garlic, chaat masala, black pepper and a tang of lime laced over paneer cubes, in no more than 30 minutes!

Try it at home and let us know your experience in the comments section below.