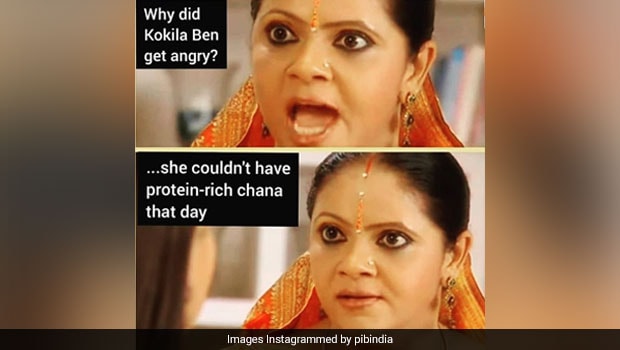 The month of September has been earmarked as ‘Rashtriya Poshan Maah’ by National Council on India’s Nutrition Challenges. Every year, the government carries out various activities on ground level to give impetus to holistic nutrition among the citizens of India. This year saw a rather unique promotional tactic by the Maharashtra sect of Press Information Bureau India. PIB Maharashtra decided to catch the nerve of netizens by joining the trending meme bandwagon to spread the awareness of consuming protein-rich foods. You must have guessed it by now – they used the currently viral and very popular ‘Rasode Main Kaun Tha‘ meme.

While Prime Minister Narendra Modi urged people to support the Nutrition Month campaign through ‘Mann Ki Baat’, PIB took the humour road to connect with the masses. On its official Twitter and Instagram handles, PIB Maharashtra posted a meme from the famous ‘Rasode Main Kaun Tha‘ sequence from Hindi TV show and wrote – Why did Kokila Ben get angry? Because she couldn’t have protein-rich chana that day.” Quite an innovative way to promote protein-rich chana, we say.

PIB also added the caption – “Rasode Mein Kaun Tha? Whoever it may be, please ask them to add pulses.” Hashtags included – #RasodeMeinKaunTha and #poshanmaah in the same place.

Some users were quite impresses with this creative way of promoting protein-rich pulses intake. Comments like “Nice way to express in this trending post” and “This is so smart! Loving this” poured in.

For the unversed, recently the rap music video “Rasode mein kaun tha” by music composer Yashraj Mukhate went crazy vial. The video took a shot at a scene from the serial Saath Nibhaana Saathiya in which a lady named Kokila Ben is angry with her daughter-in-law for removing chane from pressure cooker and putting the empty cooker back on stove.