Raw Mango Rasam: Welcome The Season Of Heat With This South Indian Soup (Recipe Video Inside) 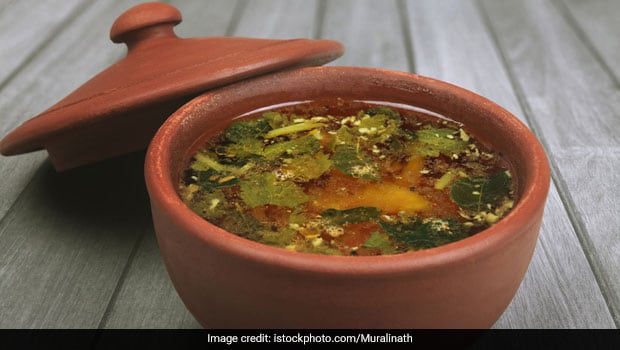 There’s no doubt about that fact that ‘rasam’ is synonymous to comfort for any south Indian food lover. It is a soup preparation in the south Indian cuisine that is made using lentil, tamarind or kokum, pepper, range of vegetables et al. In simple language, it is a soup sans corn flour, similar to ‘shorba’. Imagine that bowl of the heart-warming tangy soup after a long hectic day! Renowned food historian KT Achaya, in his book ‘A Historical Dictionary of Indian Food’, wrote, “Rasa in Sanskrit means extract. Rasam in the Tamil country is a thin extract of thuvar dal spiced in various ways, such as pepper, tamarind, lime, tomato, curry leaves, etc. It is poured on rice as the first course of a south Indian meal. Rasam is also called saar, saaru, chaaru and pulusu in other south Indian languages. The British colonials adopted it as a pungent soup called mulligatawny.”

‘Rasam’ is traditionally enjoyed with steamed rice, idli and vada. Other than its soothing taste, ‘rasam’, due to its ingredients (like curry leaves, tamarind, spices etc), is also treated as a nutrient-rich food item. As per experts, rasam is a powerhouse of vitamins, minerals and antioxidants, which has several health benefits (like promoting weight loss and good digestion). Other than the conventional ‘lime rasam’ or ‘ginger rasam’, several kind of experimentations can be done with the ‘rasam’ recipe.

As the country is all set to welcome the summer season, we bring you a recipe, which will not only soothe your palate, but also add flavour to the season. It is called ‘raw mango rasam’. This dish is originally known as ‘mangaai rasam’. To start with, the ingredients used for the recipe are- raw mango puree, arhar daal, tomato, mustard seeds, coriander seeds, cumin seeds, turmeric powder, ginger, garlic, black pepper, salt, whole red chilli and curry leaves.

Also Read: How To Make Rasam Powder For Restaurant-Style Rasam At Home