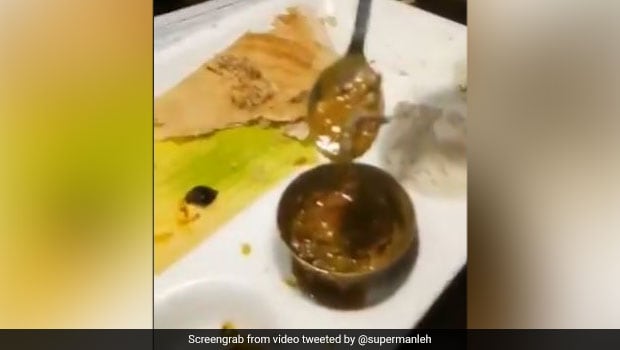 A leisurely trip to a restaurant turned into a night of horror. A group of friends visited a popular Delhi restaurant to enjoy some south-Indian food only to find a dead lizard in it! The men ordered dosa and sambar combo for dinner at a south-Indian restaurant and were shocked to see a dead lizard in their bowl of sambar only after half-way into the meal. The agitated customer filmed a video of his half-eaten meal, which also showed a menu of the restaurant to record the name of the restaurant. In the video, the man can be seen holding a spoonful of sambar with a carcass of the lizard.

“I have eaten some bites from the sambar bowl. Half of the lizard is missing,” the disgusted customer can be heard lashing out at the restaurant staff who were apologetically assuring that this mistake won’t happen again.

(Also Read: This Pav Bhaji Video Is Going Viral On Twitter And Here’s Why)

The horrific video was posted on the internet, which went viral shocking the netizens. Hundreds of comments flooded in, like – “I was there recently.. this is scary.. I won’t go there again..”, “People used to wait and stand outside for getting table in this overrated place”. Some users even blamed the customer for going out to a restaurant during the pandemic.

A police case has been filed against the restaurant, which has been running for many years in the plush Connaught Place in Delhi. The area is home to a large shopping complex, offices and several other restaurants.