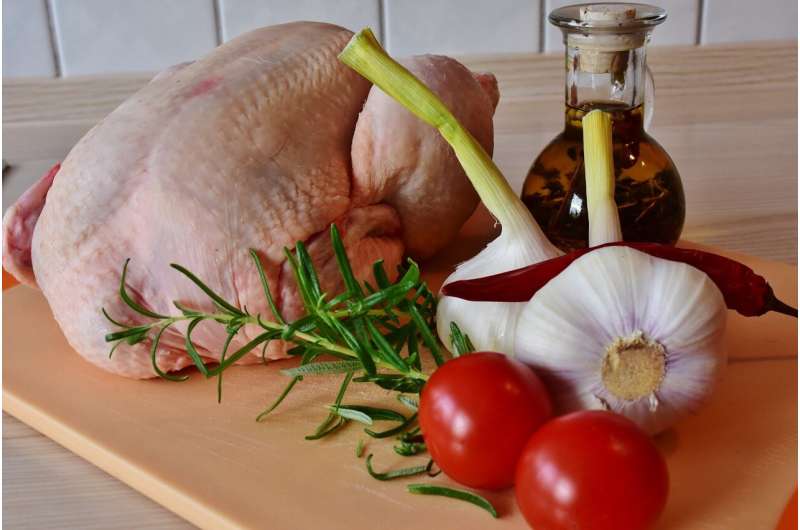 In a study aimed at assessing the impact of washing poultry on kitchen contamination, researchers found that more than a quarter of study participants contaminated salad with raw poultry—including many study participants who did not wash the poultry. The study highlights the importance of hand-washing and cleaning and sanitizing the kitchen in order to reduce the risk of foodborne illness when cooking at home.

Washing raw poultry is not recommended, due to concerns about inadvertently contaminating other foods and surfaces—and increasing the risk of foodborne illness.

“We wanted to know what effect an educational intervention would have on getting people to stop washing poultry before cooking, and what effect any resulting change in behavior might have on reducing contamination in the kitchen,” says Ellen Shumaker, corresponding author of the study and an extension associate at North Carolina State University. “We also wanted to get a better idea of how, if at all, washing poultry actually led to increased contamination in the kitchen.”

For the study, researchers recruited 300 home cooks who said they washed poultry before cooking it. The researchers sent food safety information to 142 of the study participants via email, outlining risk-reduction efforts—including the recommendation to not wash raw poultry during food preparation. The remaining 158 study participants did not receive the education intervention.

What the study participants didn’t know was that the chicken thighs were inoculated with a harmless strain of bacteria, which the researchers would be able to detect. This allowed researchers to swab surfaces in the kitchen to see whether any cross-contamination occurred during the food preparation and cooking process.

“Regardless of whether people washed their chicken, the kitchen sinks became contaminated by the raw chicken, while there was relatively little contamination of nearby counters,” Shumaker says. “This was a little surprising, since the conventional wisdom had been that the risk associated with washing chicken was because water would splash off of the chicken and contaminate surrounding surfaces. Instead, the sink itself was becoming contaminated, even when the chicken wasn’t being washed.

“Washing the chicken is still not a good idea, but this study demonstrates the need to focus on preventing contamination of sinks and emphasizing the importance of hand-washing and cleaning and sanitizing surfaces.”

The paper is published in the Journal of Food Protection.

Should you wash your raw meats and vegetables before cooking?

This document is subject to copyright. Apart from any fair dealing for the purpose of private study or research, no
part may be reproduced without the written permission. The content is provided for information purposes only.

How Long Is 3 Business Days