This chicken biryani recipe is a must-try.

Biryani is of the great achievements of Indian cuisine that has left its mark not just in India but across the globe. Deep-set flavours and overwhelming aroma of spices put biryani on a different pedestal when it comes to similar rice dishes like pulao. Brought to the Indian subcontinent by Mughal rulers, biryani caught the fancy of people here soon and was recreated in different versions as it traversed boundaries adapting to the regional flaovurs. That’s why you find so many varieties of biryani in different parts of the country but with only small tweaks. While all Indian biryanis retain the same essence of strong flavours, you may choose to make it the way you like it.

If you like your biryani a bit more succulent with more heat, try this chicken reshmi biryani. The recipe here shares some genius tips to make the perfect biryani like you get with traditional slow-cooking method in earthen pots. First, the recipe uses large pieces of chicken to contain its juices; and secondly, it tells you how to cook authentic biryani on kitchen stove with an easy trick. And, that is – seal your biryani with regular dough to prevent the escape of steam and letting the rice absorb the flavours and the aroma of spices and other ingredients fully. Genius!

(Also Read: Biryani Lovers, You Have To Try This Unique Char Minar Biryani) 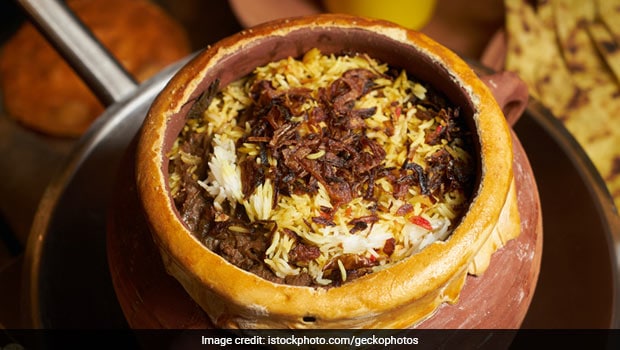 Here’s the complete recipe of chicken reshami biryani for you to try at home.

This one-pot biryani recipe is so east to follow, you’ll wonder why you didn’t come across it before. To make creamy reshami biryani, use curd to add in its velvety touch. Marinate your chicken with curd, salt and spices like ginger, garlic, turmeric, chilli powder, garam masala, and keep it aide for at least 4 hours to let the chicken suck in the flavours.

Then, make sure to cook rice al dante i.e almost-cooked. This prevents turning rice mushy while it is cooking with other ingredients. Also, to create earthen pot-cooking effect, make alternate layers of chicken pieces with fried onions, coriander leaves and rice. Then, cover the pan and seal the edges with dough. Don’t forget to grease the edges before putting the dough so that it comes off easily later.

There is another helpful trick in this recipe to make this biryani taste heavenly. First cook biryani in dough-sealed pan on high heat and then place it on tawa and let it cook for one hour. And, that’s how you make slow-cooked chicken reshami biryani. Try this recipe and don’t forget to garnish with some fried brown onions.