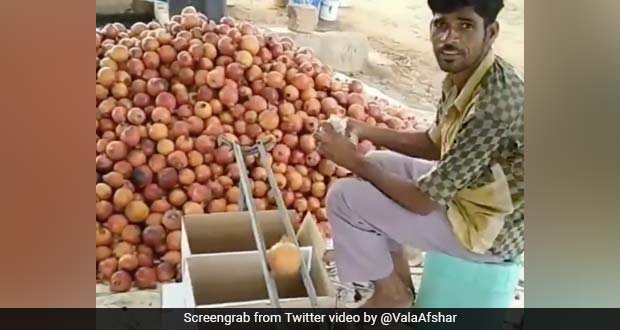 A fruit seller’s hack to segregate fruit produce into boxes is winning praise.

It is often said that the most complicated of dilemmas have the simplest of solutions. Indians especially are known to have a unique talent or skill, colloquially called ‘Jugaad’; which is a philosophy that helps make the best possible use of limited resources. One such hack was recently shared on social media and has been going viral. An Indian fruit seller devised an ingenious method to sort his fruit produce into boxes by size. Take a look at the video shared on Twitter:

The world’s most simple ‘sorting by size’ system pic.twitter.com/pYRXJFPi8u

The video was shared by Twitter user Vala Afshar and was originally captured by a page called ‘Momentos Virales’. In the video, an Indian man can be seen sitting alongside a huge pile of pomegranates. He is rapidly sifting through the humongous number of fruits and sorting them into four-five cartons. The contraption that he uses to sift through them is simply two metal rods placed at a slant. The gap between the metal rods increases as per the carton. So, once the fruits are placed on the two rods, they roll forward and fall into the appropriated box according to size.

The innovative hack devised by the man soon went viral on social media. The video received 3.7 million views and over 100k comments and counting on the micro-blogging website. The surprisingly simple hack won lots of praise from users, who called it ‘brutally ingenious’ and ‘simple, yet effective’. Take a look at some of the reactions from netizens on Twitter:

Such type of tech are found in india commonly known as jugaad????????

You don’t need machine learning to do this.

Another example to always solve a problem with the first rule: Keep It Simple ✌????

What do you think of this hack? Tell us in the comments below!