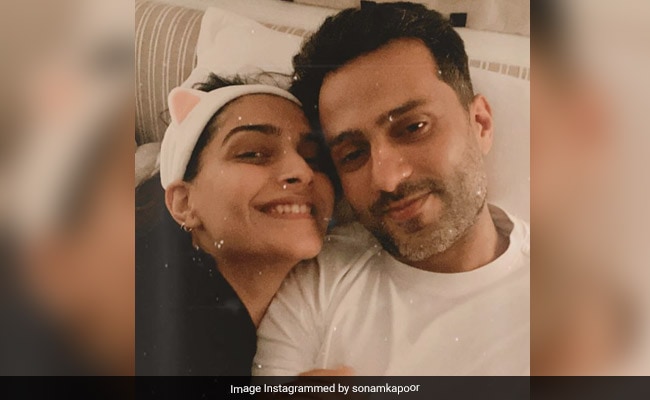 Sonam Kapoor birthday: The actress rang in her birthday with husband Anand Ahuja

Actress Sonam Kapoor turns 35 today. To mark the special occasion, Sonam’s husband, Anand Ahuja, threw an intimate birthday bash for which he planned quite a few surprises. As per one of Sonam’s Instagram stories, Anand managed to reunite Sonam And Rhea Kapoor on Sonam’s birthday eve after months. The house party was attended by close family members and a few friends; and for thirty-fifth birthday, Sonam cut not one or two but four birthday cakes that were sent over to her place. One of the birthday cakes was by her close friend and renowned pastry chef Pooja Dhingra. Sonam loved the cake so much that she decided to steal a bite even before they officially rang in the celebrations. In her Instagram story she wrote, “Eating Pooja’s cake before my birthday coz I can’t wait! Thank you my love!! @poojadhingra”. The chocolate cake with macaroons with Sonam’s name written on it, sure looked very tempting, and so did the other three cakes that made it to her beautifully decked up hall. Clearly chocolate cakes ruled the spread. There were at least three chocolate cakes laid out on the table, while one covered in luscious chocolate ganache, one studded with macaroons, one was covered with nuts. The fourth cake seemed like a mango cake with a smattering of mango jam.

On professional front, Sonam was last seen in Hindi adaptation of the ‘Zoya Factor’, wherein she starred opposite Dulquer Salman. Sonam chose to quarantine in Delhi with her husband and in-laws after the lockdown was announced. Once the situation gets better she would resume work on her upcoming projects that may release next year.