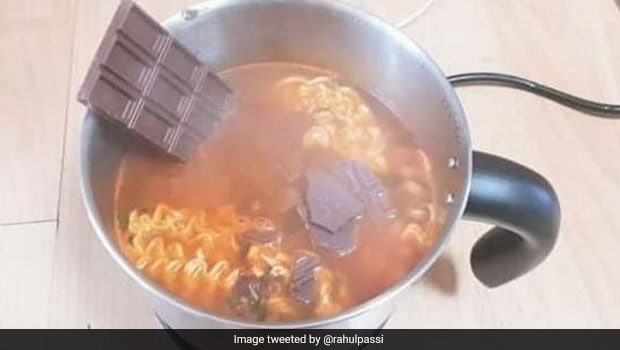 Maggi and chocolate was paired together in this weird picture.

The internet is often a storehouse of creativity, with netizens coming up with a number of interesting and unique food combinations. These are mostly fusion foods which often go viral because of multiple reasons such as the Dalgona coffee or the humble banana bread. However, on certain occasions, creativity often ends up going viral for the wrong reasons too. One such recent picture surfaced on the internet combining much-loved instant noodles with a bar of chocolate, and the picture did not go down well with netizens.

Once again i will cook CHOCLATE MAGGIE today. ???? pic.twitter.com/EslMi5akT8

The Twitter user Rahul Passi had tweeted the picture on his handle. The photograph had a pan full of boiling Maggi, and a bar of chocolate put in the same pan. Netizens reacted strongly to the picture, saying that they wanted the user to be blocked. Some other Twitter users didn’t mind the combination and suggested garnishing it with fruits or mango juice. Take a look at the reactions:

OH GOD!
I can’t unsee this!

(Also Read: This Will Give You The Creeps: 12 Most Weird Foods People Actually Eat)

This isn’t the first time Maggi noodles has become a source of creativity for netizens. Earlier, some users had paired Maggi with Pani Puri as well – much to the collective shock of netizens. Instant noodles have plenty of room for innovation and that’s why yet another bizarre food combination was made with the delicious North Indian Makki ki Roti being paired with Maggi too. Take a look at the pictures:

Do you think you will try this weird Maggi combination? Tell us in the comments below!