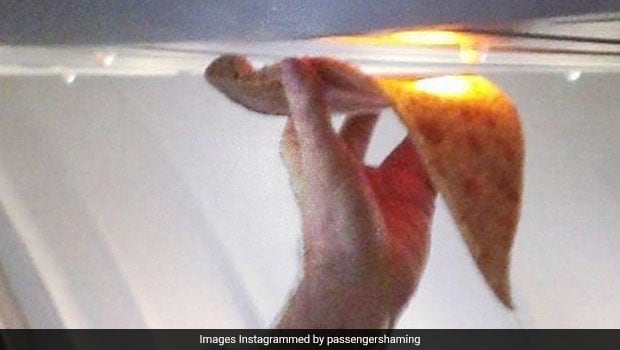 A passenger had an easy way out to heat his pizza while in flight.

Indians are known for their jugaad, that is, making the best out of whatever available resources they have. One such post on the internet resonated quite well with this very spirit that powers the creativity and innovation in us. An Instagram page shared a picture of a flight passenger who came up with a unique solution to heat up his leftover pizza slice while he was in flight. What he did was that he simply held up the pizza slice in the air, close to where the overhead light is situated. He used the heat from the reading light to warm up his delicious pizza slice. Take a look at the picture:

(Also Read: Missing Flights And Flight Food? So Are These People Who Are Ordering Cheaper Flight Food Home)

The picture was shared on Instagram by a page called @passengershaming, aimed at chronicling funny and bizarre activities by flight passengers. They wrote along in the caption with the throwback post, “Just warming up some leftovers… relatable post-memorial day activity… #throwback post that is still one of my faves!”

The picture soon went viral on Instagram garnering over 8,000 likes and 300 comments. Users poured in their amused reactions with the passenger’s interesting hack to reheat a pizza slice using a light bulb. One Instagram user wholeheartedly agreed to the idea, saying, “It’s like an Easy Bake Oven for the world traveler. If a lightbulb is good enough to cook brownies its good enough for pizza.” Another also added that the lightbulb does get heated up after sometime. “I actually got burned for touching that light after hours of being switched on,” he commented on the post. Yet another user was averse to the idea, calling it unhygienic. He wrote on the post, “I’m disgusted,” and later added, “But it could definitely be worse.”

What do you think about this idea? Tell us in the comments!