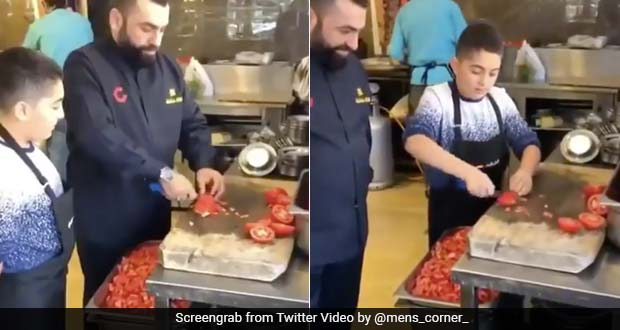 This father-son duo has impressed netizens with its chopping skills.

If there’s one thing that takes up most of the cooking time, it has to be the preparation process of chopping. Whether it is vegetables, fruits or even herbs to garnish – all of them require chopping in some form or the other. While there are a multitude of appliances that make the process of chopping less cumbersome, there’s a certain finesse and personal touch that comes to your preparation when you chop vegetables by hand. A father and chef at a restaurant in Turkey taught his son how to chop vegetables quickly and easily, and the son imitated his father with surprising ease. Take a look at the video which is now going viral on social media.

You can see the proudness of the father. pic.twitter.com/Svvasn1JFN

The video was shared on Twitter by @Mens_Corner_ and had earlier been shared on Instagram as well. The clip shows the father chef chopping up tomato into halves with a knife, and a simple technique which he seems to have perfected over years of practice. The father then hands over the knife to his son, who is able to imitate his father’s dexterity effortlessly, much to the collective surprise of the internet.

The son’s chopping skills won a lot of praise on the internet, as the video went viral on social media garnering over 417k views and counting. It also received over 17k likes and 4k comments on Twitter with netizens pleasantly surprised with the father-son duo’s chopping technique. Users commented and poured their reactions to the video on social media. Take a look:

Me if I tried pic.twitter.com/OehiSSv5UD

In one word, fantastic!

Ohhh that turned out much better than I thought it would!

What do you think of the video? Tell us in the comments below!