We Found The Worst Account On Twitter For Gripping Food With Force – Do You Agree With Us? 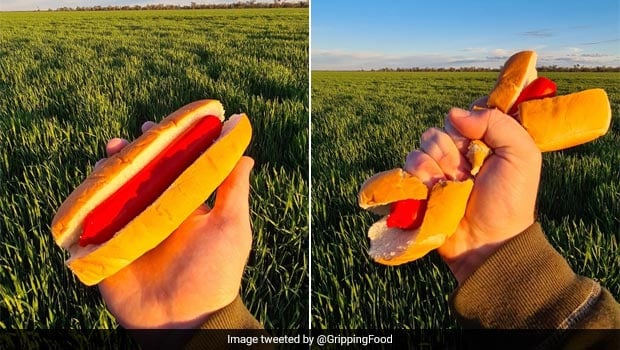 If you love food as much as we do, you must look at it as sacrosanct. We cook with love, eat with all our heart and see it as nothing less than an inviolable part of our life. And, if we see anybody disregard food, it is ought to irk us. Surprisingly, this time we are not really offended, or maybe we are – we can’t really make up our mind. We stumbled upon a Twitter account that takes pride in smashing and scrunching some glorious food creations and posts pictures of foods being gripped hard with the force of hands. The account blatantly admits on being the ‘worst account on Twitter’ and it annoys and amuses us at the same time.

The viral posts messes up with all our favourite foods – hot dogs, meats, fries, banana, chocolate, watermelon, cookies – you name it and they would have ripped it apart! They also invite people to share pictures of their acts of crime against their foods. The self-proclaimed ‘worst account on Twitter’ goes by the name of ‘Gripping Food with Force’ and claims that none of the foods are wasted – they spoil it but also eat it later. Thank God!

Here are some posts of gripped foods. Proceed with a strong heart.

While we are unable to take sides, netizens are having quite some fun seeing these bizarre pictures. Other than partaking in the heart-breaking but fun activity, people are also pouring comments of disgust, hatred, love, amused – all of them. Contrasting comments like ‘This one really hurts’ and ‘It is actually satisfying’ confused us further to whether like or hate this Twitter account. What do you think?